When experts are no longer people: Could AI destroy the MSP value proposition?

Like many MSPs (me included as an MSP partner!) you may be regarding the hype around AI with a certain amount of trepidation.

After all, AI has enabled systems to be ‘trained’ to manage routine, repetitive tasks such as infrastructure monitoring and maintenance, network traffic control and even the automatic application of system fixes. On the service desk side, chatbots are now available to manage customer support tickets and engineer scheduling.

With these the very same activities typically outsourced to MSPs, is it any wonder that many fear AI will put their whole value proposition at risk?

While we’re still at the early stages of what is possible, one thing is for sure: AI could be the next big disruptor for MSPs.

AI: What do we mean?

CompTIA defines AI as the practice of designing systems to make intelligent decisions based on context rather than direct input.

AI can be achieved through complex rule-based systems, but AI through machine learning seems increasingly the way forward now. Machine learning according to one definition is:

“the science of getting computers to learn and act like humans do, and improve their learning over time in autonomous fashion, by feeding them data and information in the form of observations and real-world interactions.”

Machine learning involves ‘training’ algorithms to discover patterns and generate insights into huge quantities of unstructured data, then use that new information acquired to make adjustments and improvements.

How useful could AI be for MSPs?

A ChannelProNetwork article from October 2017 points out that AI is already enabling MSPs to meet SLA requirements more easily, reduce company expenditure and enhance service offerings – so helping MSPs to grow and enabling them to improve client support and retention.

Indeed, even if MSPs have not implemented AI themselves, they may already be benefitting unwittingly from AI embedded in the tools that they use: the RMM tools and infrastructure components such as routers and firewalls, for example.

And, acknowledging that many of the day-to-day essential routine tasks MSPs take on for their customers tend to be boring and repetitive for the engineers who must perform them, the ability of AI systems to take over many of these tasks could be extremely useful – even if, for the present at least, these sophisticated toolsets still need to be deployed, monitored and managed by humans.

One of the biggest areas of debate, however, focuses on the wisdom of MSPs using AI to directly interact with customers via the service desk.

On this topic, comments in one Reddit thread I chanced upon range from shock to incredulity that an MSP could even consider obliging customers to deal with a ‘bot’ for support.

Nevertheless, it is happening.

The rise of the chatbot in customer service

Despite this reluctance to accept that a machine/human dialogue would work for (and be accepted by) customers,   Forrester Research affirms that  customer service in a number of industries is being transformed, with AI being embedded in service platforms to assist in repetitive tasks – or even take them over completely.

And AI already seems to be proving its value to some MSPs in performing some of the routine aspects of service desk support.

MSP chatter (no pun intended!) focuses on the introduction of sophisticated chatbots that can be used to help customers submit and update support tickets and alert engineers immediately for any urgent issues.

Engineers are thus freed up to focus on those issues that need deeper insight and analysis – and to nurture deeper customer relationships in the process.

SupportBot has emerged as one such chatbot, designed specifically for MSP and IT service providers to help improve the customer experience and reduce time and cost.

The company estimates potential cost savings of $600 per technician per month to MSPs who use SupportBot. This figure is based on 28 technical man hours per month saved, with an assumed average hourly rate of $22. (In fact the reduction of 28 hours a month could actually be conservative, given it is based on saving eight minutes per ticket, while beta testing apparently resulted in average savings of 24 minutes per ticket.)

Crucially, SupportBot also provides full access to PSA tools like Autotask and Connectwise, as well as to engineers’ calendars, so it can be integrated within the MSP’s support process.

Customers, so the company claims, interact with SupportBot “just as they would with any other person” – although this may be a claim too far for some MSPs who express concern that chatbots could potentially create a barrier between themselves and their customers.

AI: a threat or an opportunity for MSPs?

Will AI remove the MSP raison d’être – or make it easier for you to grow the business and provide higher service levels to a greater number of customers?

Some industry commentators are confident that Al will revolutionise systems management, and view this very much as an opportunity for MSPs, with AI empowering them rather than threatening their very existence – provided that MSPs are prepared to adapt.

Yet. the CompTIA survey flagged a number of areas of concern. 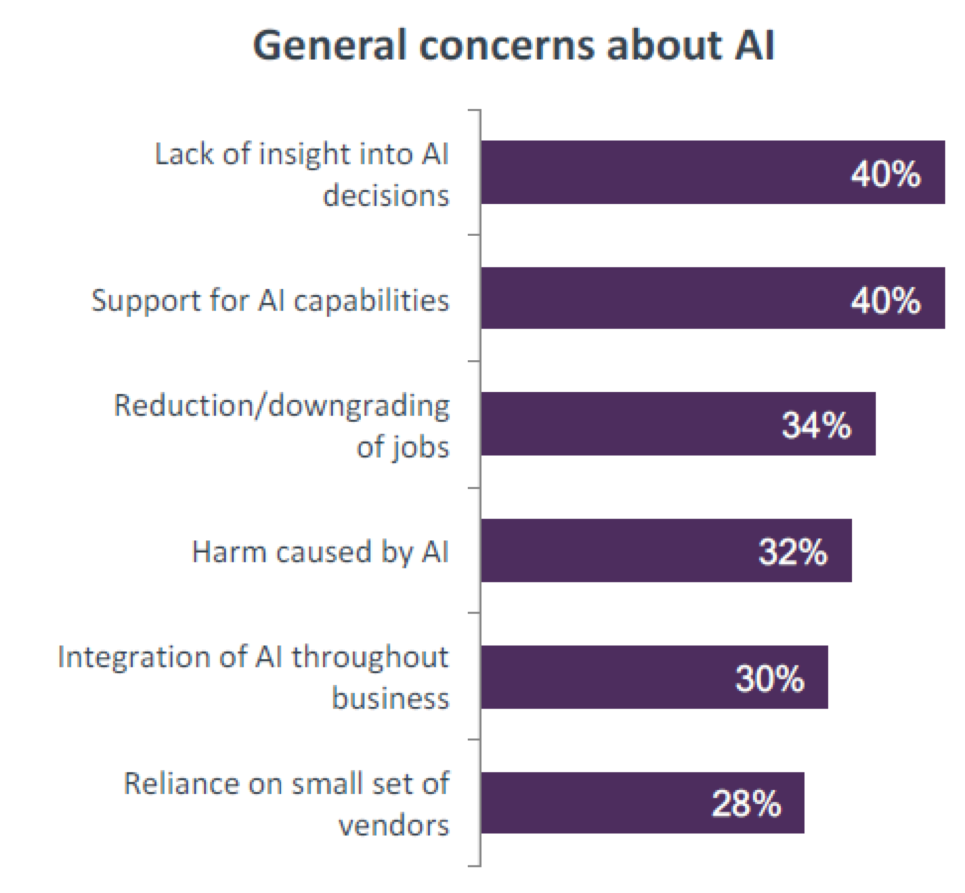 Joint top of the ‘concerns’ chart (with fears possibly fuelled by 2001: A Space Odyssey), is potential loss of control over AI decisions. In this iconic film, the HAL 9000 computer, faced with the prospect of disconnection, ‘decides’ to kill the astronauts in order to protect and continue its programmed directives.

Right alongside, is concern about the level of ongoing support needed for this kind of expanded tech footprint: AI systems are complex to support. But while this may be a worry for MSPs, it has a positive spin for them too: the same concern would probably deter their SMB customers from adopting AI to replace them!

And of course there is particular concern about AI replacing or downgrading IT jobs.

It is true that some entry level IT jobs could be at risk when repetitive and predictable tasks are being performed by intelligent systems. But the flip side is that by removing lower value tasks, your engineers will have the time and energy to focus on higher value, more demanding projects – and on developing the new skills they will need to ensure they remain on the ‘bleeding edge’ of technology and offer increased value for your business.

An analogy is often drawn with the introduction of automation in the car industry, which ultimately led to higher skilled jobs being created.

Despite the concerns, all is not doom and gloom.

The practical application of AI for MSPs is still in the early stages, definitive proof statements as to its impact are still thin on the ground and there is probably more pessimism than optimism from MSPs currently about its impact.

Yet, far from wiping out the MSP proposition, AI could deliver a massive boost to MSP productivity, customer service and ultimately to the bottom line – provided that it is introduced as part of a strategic plan, carefully worked out with your technology partners, your team and your customers.

And that’s something humans rather than chatbots will have to do!